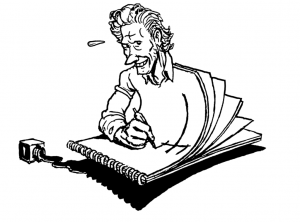 Peter Pontiac was a self-taught man, and Dutch greatest underground comic artist.
Began to work for national and international music- and underground magazines in the late sixties.
Later he worked for every well-known newspaper and magazine in Holland, as one of the most important illustrators.
He received, both national and international, several prices for his work.